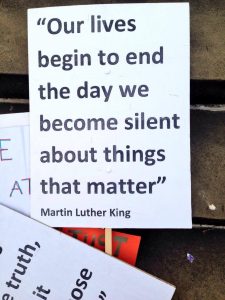 On Friday 22nd July 2016, a Black Lives Matter peace rally took place in the city centre. SADACCA hosted some incredible young people in the weeks leading up to the rally, giving them a place to gather, make posters and write speeches.

Team leader Ross Walcott, aged 18, told me: “A lot of times people just talk about something needs to be done but nobody ever does anything, so I decided to create this event. The response was out of this world. The general feel of the peace rally was hope and a desire for change, both locally and nationwide.” Another organiser was 19 year old Abdullah from Burngreave, who said: “We held our peace walk and rally to show solidarity with America and with people in the UK who have died as a result of the police. The best thing about the rally was the unity and support from people of all backgrounds. “We were determined not to let it be a one-day event and set up the Afro-Sheffield Foundation to reach out into the community, help promote awareness of #blacklivesmatter and the importance of knowing your history, and help to unify the Black community.”

Hundreds of people attended the rally from across the country and the crowd was incredibly diverse, proving this is a cause close to many people’s hearts. The rally had speakers from various communities. Ashleigh Thomas had much of the crowd in tears with his incredible speech – both heart-breaking yet filled with hope. You can find out more about the Afro-Sheffield Foundation at www.facebook/afrosheffield.