On 12th September, a Royal Naval Parade and the opening ceremony of the new Sheffield Sea Cadets took place in our new unit on Rutland Road. It was attended by forces’ veterans, Councillors Talib Hussain and Jackie Drayton. Officers inspected the uniforms of Juniors, Marines, and Sea Cadets on parade. Sea Cadets organised a performance to demonstrate their development. Royal Marine Cadets demonstrated how they patrol and move in the field, and Junior Sea Cadets sang a song they had written about the staff members. 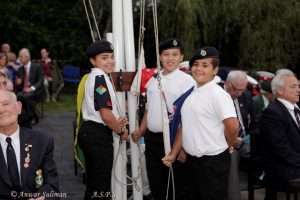 Finally, the Captain spoke to the entire ship’s company to praise the hard work and commitment of both Cadets and staff. Chairwoman Teresa Smith said: “It has been a huge transformation, going from a small team of six Cadets and staff to over 100 in an excellent training centre. A huge thanks to all who have been involved in getting us here. The future of the ‘Shiny Sheff’ looks bright!”

The opening of this new unit was made possible through Cadets’ and staff fundraising. This summer more than thirty Cadets, parents and staff braved the weather for a sponsored abseil off Millers Dale Bridge raising over £3000. Our new Sea Cadet unit has great potential to grow and we are currently recruiting adult volunteers and Cadets. No prior training is required. Visit the Falkland Training Centre on Mondays or Thursdays 7-9pm or see our Sheffield Sea Cadets Facebook page.