This summer Pitsmoor Adventure Playground became Pitsmoor-on-Sea. The seaside atmosphere was created with lots of sand, a lighthouse and a giant paddling pool built from bales of hay and tarpaulin. Activities included a sandcastle contest, bubble-making, building beach huts and relaxing with home-made ice cream.

“I had loads of fun making the lighthouse and getting ready for Pitsmoor-on-Sea” said Sarah Truman, a volunteer. Play Leader Katie Lee said, “What an exciting time to join this fantastic team, I loved building and playing in the swimming pool.”

The Pitsmoor Olympics were a success once again, and the High Sheriff of South Yorkshire, Julie MacDonald, visited for National Play Day, saying, “The play workers and volunteers are not only dedicated but truly inspirational and it’s obvious the children love coming here.” 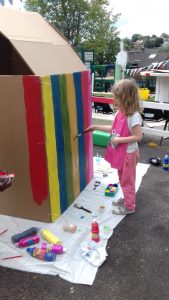 On trips to Cleethorpes and Mablethorpe (with the support of UNISON at Northern General Hospital) the children and their families enjoyed swimming, playing football, discovering crabs, fish and even a snake! The last event of the summer was a beach barbecue courtesy of the local Tesco store. As 9 year old Mohammed Abdulla says, “At Adventure you can work your brain, run and jog and stuff like that. You don’t have to stay at home and just play on your Xbox all the time, you get to make new friends and play pool with them.”

Fantastic activities are now planned for the coming weeks, such as lantern making for this year’s Beacons lantern procession, a week of Halloween based activities during October half term and a weekly cooking club on Thursdays. It is looking like a great autumn is in store!