Christmas saw the return of the Pitsmoor tradition of the ‘Scratch Nativity’ at Christ Church. Adults and children turned up on the day and started from scratch, without casting or rehearsals, to put together the nativity play.

Without casting or rehearsal we spent an hour having fun but also celebrating the story. As ever, the lack of casting meant anyone played any part they wanted, which is so vital if children have missed out on being the character they wanted to be in a school nativity. This can lead to some interesting results – this year we had six babies playing the part of Jesus all at the same time. We also had the usual fun creating costumes from whatever we could find.

As ever it was a great open time and one we encourage folks to feel free to pop along to in just over 300 days time.

Martial arts classes led by Graham Abdullah, former European champion. Every Tuesday and Thursday evenings and Saturday mornings throughout the year. For children and adults from age 5 years and upwards. For more details, see: https://archive.burngreavemessenger.org.uk/archives/2007/june-2007-issue-70/kung-fu-in-china/
10:00 am Library open
Library open
May 30 @ 10:00 am – 1:00 pm
Our award winning Burngreave library is run by Marcia Layne and her team of volunteers. They are supported by SOAR and the Burngreave TARA. Come along to use computers, WIFI and of course borrow books, ... [Read more]
10:00 am Tool bank open
Tool bank open
May 30 @ 10:00 am – 12:00 pm
You can find the Green City Action tool bank round the back of Abbeyfield Park House. Tools large and small, as well as garden equipment available to hire at bargain prices. No need to spend ... [Read more]
12:00 pm Bit Fix it
Bit Fix it
May 30 @ 12:00 pm – 3:00 pm
Our Saturday sessions at Abbeyfield Park House are Pay-As-You-Can and our visiting professional service costs £20/h for individuals, £30/h for organisations after the initial free diagnosis. email info@bitfixit.org.uk or call 0114 299 4575
12:00 pm Fatima Community Centre table to... @ Fatima Community Centre & Mosque
Fatima Community Centre table to... @ Fatima Community Centre & Mosque
May 30 @ 12:00 pm – 4:00 pm 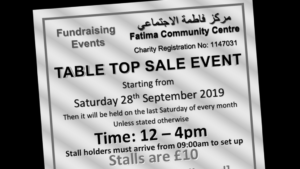 Monthly Table Top Sale. An opportunity for you to de-clutter, earn some extra cash. 12-4pm every last Saturday of every month except in January and held at the Fatima Community Centre & Mosque, 105 Brunswick ... [Read more]
12:30 pm Pitsmoor Adventure Playground @ Pitsmoor a
Pitsmoor Adventure Playground @ Pitsmoor a
May 30 @ 12:30 pm – 3:30 pm
Pitsmoor Adventure Playground is now run by a charitable organisation set up by local people, and is as popular as it’s ever been. Qualified staff are on site during opening hours to ensure a safe ... [Read more]
5:00 pm Mothers of Burngreave Youth Club
Mothers of Burngreave Youth Club
May 30 @ 5:00 pm – 7:00 pm
For ages 8—18 (under 8s with mother) Donations welcome Please contact mosburngreave@gmail.com
May
31
Sun
10:30 am Morning Worship & Children’s Act... @ St Peter's Ellesmere
Morning Worship & Children’s Act... @ St Peter's Ellesmere
May 31 @ 10:30 am – 11:30 am
Everyone Welcome!
12:00 pm Sisterhood women only basketball...
Sisterhood women only basketball...
May 31 @ 12:00 pm – 1:00 pm

A ton of talent from local bands