My lovely local hairdresser, Diane, spoke to me while styling the hair of a loyal customer of 20 years. I have been going there forever too – and alongside the haircuts, there is a wealth of conversation, a tipple at Christmas and friendship. 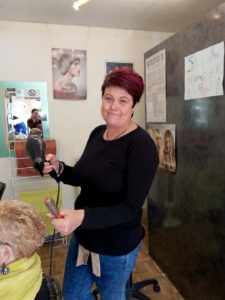 Diane took over Twilights on Barnsley Road in 2000. She began hairdressing at 15 and after school she completed her apprenticeship at Granville College and later became an Advanced State Registered Hairdresser. She worked in a barber’s shop in Upperthorpe and a salon at Firth Park before taking over the Twilights salon. She says over time Meadowhall has changed local shopping habits, with so many people choosing to get everything done under one roof. Local shops have suffered
as a result. The wide variety of businesses – now gone – included a chip shop, video store, petrol station, the Cannon Hall pub, the Companions Club, and others. Not all the changes are bad though – Diane enjoys catering for a range of people of different nationalities.

Diane also trained to be a gym instructor – mostly working at Zest in Upperthorpe. She keeps up this energy with charity walks and the odd trip down a zip wire!

Due to a back operation thirteen years ago, Diane cannot spend too much time standing so she has cut down on her hours at Twilights. It is a great local business – offering a good service and a lot of friendship and support, especially to her older customers.