Isilda is happily retired now, but was only a teenager when she was forced to escape her home country, Chile after the military takeover in 1973. Alone, Isilda fled to a country she only knew one thing about – it was home to The Beatles. She spoke no English. 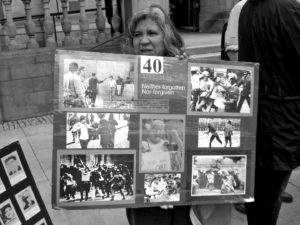 “It is happening now with the children who are being displaced, and come to a place they don’t know. You don’t know what is on the other side.”

Her first impression of Sheffield in winter was not favourable:

“It was full, full of smoke. Because of the steel factories, you could not see anywhere.”

However, she rose to the challenge of building a life amongst foreigners.

“I had a really good time. It was a laugh, because they talked to me and I didn’t understand.”

With great amusement, Isilda described to me how her Headmaster would chide her for speaking Spanish. “He would bang the table ‘You go and find a boyfriend!’” Isilda replied, “Marry
an Englishman? I will never learn the language!”

However, she did both. Her husband bought her a house on Scott Road 31 years ago, as a Valentine’s day present. Their living room is lined with family photos.

“My grandson is four and a half now… he says “meself”! I said to my husband “He’s a Yorkshire lad!””

Isilda helps run the Sheffield Chilean Community Association whose goal is to support Chileans who suffered in the aftermath of the coup d’état. The Chile SCDA are also there for newer immigrants, such as homesick students. The students aren’t the only ones who get homesick. When asked how she felt the one time she returned to Chile, she says:

“I miss my country, England!”