In his own words, Sam is taking things ‘one day at a time….’ and focusing on providing a good service for all. He is charismatic, friendly and engaging, which has obviously paid dividends, as Sam is one of the oldest proprietors in Spital Hill having opened his barbershop in 1976. 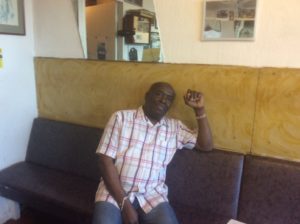 Since coming to England and Sheffield in 1961, Sam has been cutting hair for the community.

He has observed that Burngreave as an area has changed, and now looks different- with shops coming and going as well as some problems with law and order. There are advantages of being situated on Spital Hill as it is accessible, on a main road and because Sam has remained at the same location- the barbershop is easy to find.

The whole community is welcome to use his shop, as he states, there is zero tolerance on such behaviours as bad language, or bad manners as everyone is treated with the same respect.

You definitely feel that Sam has some interesting anecdotes to share – but that’s for another time.