Friday 24th March was a great celebration in school. We celebrated Red Nose Day in style – by wearing our pyjamas! Our school council decided that everyone should wear their pyjamas and pay £1, which would go to the charity Comic Relief.

At lunchtime there was a great vibe in the playground. The line for penalty shoot-out was a mile long, poor Mr Hardy spent most of his lunchtime saving goals (only the odd one went in) but it was all for a good cause. When he got tired, Miss Franks went in the net and all of the children found it hilarious – she didn’t save many goals!

The school council team also sold some homemade cornflake buns, which sold like hot cakes. Within 20 minutes the buns had vanished but our change bucket was full to the brim.

Everyone was very charitable, as they knew Red Nose Day is such a good cause. We managed to raise a whopping £840.40. 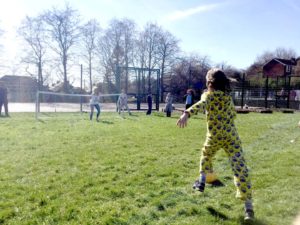 We also enjoyed a bit of a LOLathon. Each class had to record a joke and this went on Twitter. Over the weekend our followers decided which video they liked the best and liked it! The jokes were hilarious and we received lots of likes. Check out our school Twitter feed if you’d like some entertainment @_stcatherines the winning joke was from 5RC. A big well done to them.

St Catherine’s are also celebrating the great recognition awarded to Headteacher Fiona Rigby, who is one of just 70 headteachers to be appointed to the role of National Leader of Education across the country.