A couple of years ago, Owen Barnett, a 74-year-old of Pitsmoor Health Walks (run as part of Step Out Sheffield) had a serious operation on his spine. However, with support from the Pitsmoor walking group and his fierce determination, he managed to complete 200 walks as of March this year. The group awarded Owen with a certificate to recognise his achievement. 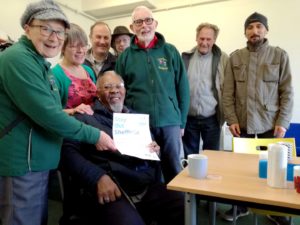 Owen has been a member of the walking group for over three years but since having three vertebrae removed from his spine in late 2015, he now has to use two walking sticks and finds walking to be painful. Staying physically active is a crucial part of Owen’s recovery and he is thankful for the group’s support and encouragement. He tells me the fun and friendliness of the
group motivates him to continue walking.

Val Ellis, a walk leader from the group says:

“Owen will hopefully inspire others who have limited mobility to try some walking also, not just for exercise but to get out of the house and meet new people; if Owen can do it, maybe they can too.”

Owen believes joining such a group is a helpful way to recover and says the group are very welcoming. He wants others to know:

The Pitsmoor group meet on Tuesdays at 1.30pm in Pitsmoor Surgery. There are three groups of walkers, depending on your ability: steppers, strollers and striders, and all groups meet at 2-2.30pm at Abbeyfield Park House to enjoy tea, biscuits and conversation. The Pitsmoor walk is one of 24 walks across Sheffield.

If you feel inspired to walk, feel free to get in touch with Francis Feeley on 07808 297 279 or email stepoutsheffield@gmail.com