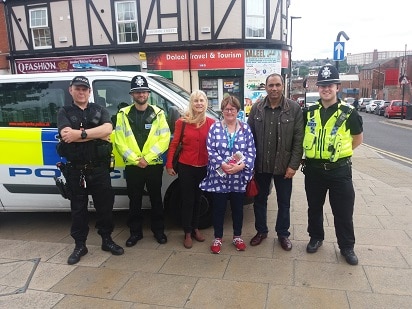 Following the violent incidents that have taken place in recent days, Gill Furniss MP and local councillors have been visiting the Spital Hill and Ellesmere Green area to listen to residents and business owners and to support the efforts of the police. 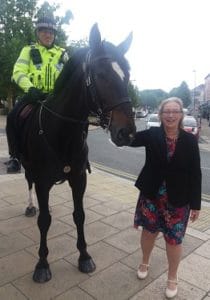 “The police say they are getting a lot of positive messages from the public about their increased presence at the moment.
And I’ve heard from shopkeepers that the recent trouble is not typical, they’ve been running their businesses successfully here for years.
This is our area, full of hard-working peaceful people and we are not going to let a few troublemakers put us in fear.”

Councillor Jackie Drayton said, “Criminals need to be dealt with firmly, it’s completely unacceptable for local people to be intimidated going about their daily lives” and Councillor Talib Hussain added, “We’ll be pulling together people from across the community in the next few days to look at ways to address these kinds of problems in the longer term.” 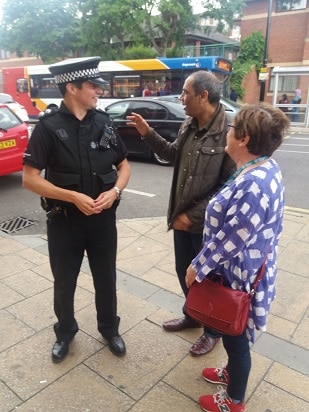 Assistant Police and Crime Commissioner and local resident Sioned Mair Richards also joined the walkabout.  She explained that policing in Sheffield will be returning to a neighbourhood model later this year, with officers specifically assigned to Page Hall and Burngreave.

“This should reinforce the link between officers and local people so that the police have a lot more knowledge and awareness of what is happening in the community.”

In the short-term a police team will be based in Sorby House. Although their office will not be open access officers will be out on regular patrols so that residents can approach them with any concerns.
People on the streets were clearly pleased to see more police in the area for the time being.  One woman told us, “It’s good to have them around, we feel safer.  It has felt scary the last few days.”
A Kurdish man said:

“People are saying it’s this or that community that is to blame, but it’s not whole communities, it’s individuals who don’t want to keep to the law.  No matter where you are from, we live here in the UK and we need to live by UK laws.”

Up the road at Pitsmoor Adventure Playground the children were busy making signs calling for peace and love in Burngreave.  “In times like these what we need is unity” said Playground Manager Patrick Meleady.