Story and photo by Graham Jones

Chief Constable Stephen Watson, the head of South Yorkshire Police, came to the Vestry Hall in Burngreave on 3rd May as part of a series of discussions with local communities across South Yorkshire to discuss their views on neighbourhood policing.

The Chief Constable stressed that:

“We work with the public and the values of the public are the same values that motivate us as a police service.”

Although offenders are only a small proportion of the population, 5% of all this small proportion of offenders commit 80% of crimes.  A local police team is being developed for all communities across South Yorkshire with a locally bespoke  team of identifiable officers and PCSOs. The aims of neighbourhood policing include better engagement with the public, supporting vulnerable people and places, the prevention of crime and anti-social behaviour.

Only 12% at the meeting thought that the police were doing a good or excellent job while 54% rated their performance as very poor. 70% of the meeting felt very (with a further 11% fairly) dissatisfied with the level of police visibility. 73% said they hardly ever saw police officers or PCSO’s. The most popular way of improving co-operation between the police and public were through priority meetings and improved accessibility to local officers.

70% strongly disagreed that the police were in touch. The most popular solution (44%) would be for drop-in opportunities. But most people felt that they had no influence in the style of policing.

The Chief Constable was confident that the introduction of community policing along with other changes in service provision would reduce the levels of crime and anti-social behaviour in the community as well as addressing some of the issues highlighted by the meeting.

The meeting then opened up to questions and discussion. Many of the questions related to the visibility and inaccessibility of the police, but the Chief Constable replied that accessibility was probably more important than visibility. Response times were also raised as an issue: the Chief Constable’s reply was that call answering times on 101 had vastly improved in recent months. A 999 call should be made in any  emergency where there is a threat to the person or a crime in progress.

One resident asked about the low number in South Yorkshire of police officers from ethnic minorities and what is being done to improve this. The Chief Constable replied that the South Yorkshire Police are actively trying to address this issue and ensure there was no inherent ethnic discrimination in the selection process.

Cllr Abtisam Mohamed asked whether there would be community police bases. The Chief Constable replied that there will be some closures of police stations but that other public buildings might be useful as police bases.

John Mellor asked about the future role of community workers and street pastors. The Chief Constable replied that he would be happy to discuss these matters with the local authority but was aware that funding might be a problem. He said that the South Yorkshire Police had lost £2.4 million funding in 2011/2012. 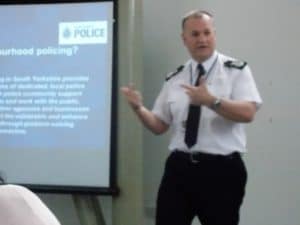 One questioner asked about poor advance publicity for this meeting and why leaflets were not issued in a variety of different languages. The Chief Constable replied that he would prefer that  his officers visited mosques etc in person to spread such information.

The Chief Constable said his force would be investigating people who had apparent unaccountable wealth with a view to confiscating illegally gained assets. He also thought it was not beneficial to bring young drug users into the criminal justice system but it would be preferable to employ a scheme where the young person pledges not to commit further crime and be  mentored, supervised and maybe tagged.

It was noted by more than one participant that the general tone of the meeting had been one of co-operation and positive feeling about the future changes to be introduced by the Chief Constable. Together our community and the police force can make big strides in reducing crime and anti-social behaviour.