In our lovely area, you don’t have to go far to find a true bit of local history: “The White House”. It has nothing to do with the ‘White House’ located in Washington, D.C., USA. This small house is one of the oldest buildings in Burngreave. No one knows exactly when it was built but there is map evidence of a little cottage near Rock Street in 1853.

Local historians think it may have been built as a farmhouse. In the 1880s, it was said to be a horse drawn cab stop off. Lumps of smelted metal have been found in the garden, which suggests a blacksmith once used the premises. The White House became a fish and chip shop in the 1950s and was last owned by Bernard and Katherine Greaves who enjoyed traveling abroad, which was unusual for the time. A lady living on Nottingham Street told me ¨I’ve fond memories of the chip shop as my children used to visit a lot¨.

Since 2007, the White House has been home to a local young man who is proud of the neighbourhood, and bought this beautiful cottage to help with its conservation and turn it into a home full of history. I asked local residents what they thought about the White House: Cynthia says, “It reminds me of ’Snow White and the seven dwarfs’ “ and ten year old Emily said “It’s nice but needs painting”. 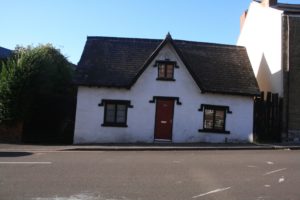