Story and illustration by Hajra Akbar

Eid ul Adha is the celebration that occurs on the tenth day of Dul Hijjah, the last month of the Islamic calendar. The month of Dul Hijjah is significant as this is the time when Muslims from across the world visit Mecca to perform the Hajj (pilgrimage).

The Hajj is the fifth pillar of Islam and every Muslim must perform the Hajj once in their lifetime if they are able.

For Eid Ul Adha Muslims offer a sacrifice of a goat or lamb to commemorate Abraham’s willingness to sacrifice, his son Ishmael to God. Muslims believe that as Abraham was about to make the sacrifice, Allah put a sheep in place of his son.

The Hajj is one of the world’s largest gatherings. In 2017 it is estimated that two million pilgrims will travel to Mecca, Saudi Arabia to gather and pray for five days. From the Masjid Al Haram complex in Mecca to the hills of Mina, the rites include circling the Kaaba seven times and visiting sites of religious importance.

The steps of the Hajj correlate to the story of Hagar, Abraham’s second wife. Muslims believe that after Abraham left Hagar and baby Ishmael in the desert:their provisions ran out and Hagar frantically searched for food and water. As she prayed, Ishmael’s heel hit the ground and the well of Zam Zam sprang forth. When Abraham returned, he built the Kaaba with Ishmael’s help.

Pilgrims being at the Kaaba in Mecca, then travel to Mina and stay overnight for prayers at dawn. Following this the pilgrims travel to the valley of Arafat to stand in the heat whilst praising God. The day concludes with travel to Muzdalifa at sunset where they pray and gather small pebbles.

On the third day of Hajj pilgrims return to Mina for the symbolic ritual of stoning the devil and the animal sacrifice for Eid Ul Adha. Male pilgrims then shave their heads and all pilgrims return to Mecca to repeat the Tawaf, and cross between Safa and Marwa seven times.

Finally, pilgrims return to Mina for final two days where they will perform the ritual of symbolic stoning,  before they return to Mecca. 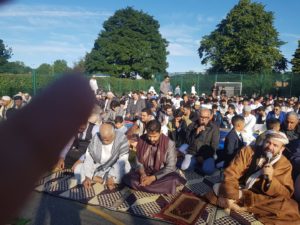