Story and photo by Matt Needham

The Church family at the 120 year old Trinity Firvale Methodist Church took the difficult decision last year to cease to worship at the Church in 2017.

The decision was taken due to the large upkeep costs of the Grade II listed building, which was built in 1898. In recent years, the numbers of members attending the church had decreased, as did the number of regular bookings from groups and clubs.

The congregation will be moving to other Methodist churches nearby, while many of the community groups which used the venue have found alternative accommodation, including the Girls’ Brigade who will continue in the area at St. Cuthbert’s Church, Barnsley Road.

Members of Trinity Firvale Methodist Church organised a special weekend of events in June to celebrate the life and work of the Church and the community which it serves. The events raised more than £1500, which has been donated to the Sheffield Helipad Appeal. 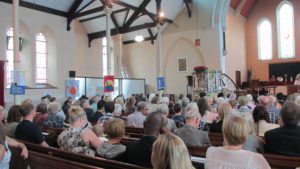 “It was a hard choice to close, but one which we feel God has led us to and one that we know does not mean the end of any of our faith journeys.”