Northern General Hospital was established in 18

78 as Fir Vale Workhouse. Goddard Hall was the children’s home and still stands in the hospital grounds. When it opened there were 1188 paupers already resident. 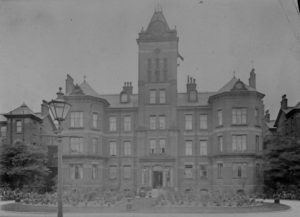 There was an asylum and children lived in another section with a school. They could be made to sleep up to four per bed. There was also a vagrants’ area, the ”piggeries”, which was not demolished until the 1980s. In 1891 there was accommodation for 1,748 residents in the “Great House”. 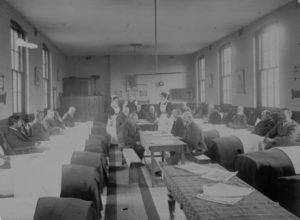 The abolition of workhouses in 1931 led to the whole institution being renamed City General Hospital but to this day some of our older residents will remember a stigma attached to the wards later designated “geriatric” in the former workhouse buildings.

In the twentieth century the hospital received casualties from both world wars and from the 1989 Hillsborough disaster. With the introduction of the National Health Service in 1948, the City General Hospital and Fir Vale Infirmary were merged and became the Northern General Hospital. With 1100 beds on and over 6000 staff from all over the world on a hundred acre site the hospital remains one of the largest in the UK. Next year will see the opening of £6.7 million specialist eye centre.

We can look back with pride at our local hospital’s development from a harsh, vermin ridden workhouse to a world class health facility providing free care for all. Long may it remain so.

See page 22 for information about the hospital history group.