Story and photos by Debjani Chatterjee

Tuesday 15th August evening saw a double celebration at the Hindu Samaj Centre. Each year Indian Independence is marked on this day, but this year being the 70th anniversary of independence, as well as of the terrible Partition that divided the country into three pieces, 15th August had a special significance. 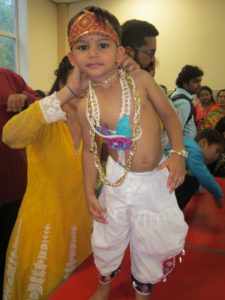 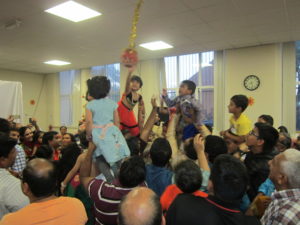 This year the day also coincided with a major Hindu festival, Krishna Janmashtami. This celebration of Lord Krishna’s birth falls on different days each year, the date being determined by a luni-solar Hindu calendar.

The evening began with a sobering reflection on the Partition holocaust, which for many was too high a price for independence. Mahatma Gandhi called Independence Day a day for fasting and prayer. All attending sang ‘Jana Gana Mana’, the Indian national anthem.

The Janmashtami celebrations seamlessly followed with beautiful devotional songs, while the crowd waited for the moment of Lord Krishna’s birth in Mathura, India, at midnight thousands of years ago. Hindus with babies and little children dressed them up as Krishna and his sweetheart Radha.

Another highlight was the breaking of the Dahi Handi (a pot of sweet buttermilk), which re-enacts a legend from Krishna’s mischievous childhood, when he formed a human pyramid with friends to steal butter that his foster mother placed beyond his reach. At the Hindu Samaj an earthen pot was hung from the ceiling and children climbed on adult shoulders to reach it with sticks.

Martial arts classes led by Graham Abdullah, former European champion. Every Tuesday and Thursday evenings and Saturday mornings throughout the year. For children and adults from age 5 years and upwards. For more details, see: https://archive.burngreavemessenger.org.uk/archives/2007/june-2007-issue-70/kung-fu-in-china/
10:00 am Library open
Library open
Feb 22 @ 10:00 am – 1:00 pm
Our award winning Burngreave library is run by Marcia Layne and her team of volunteers. They are supported by SOAR and the Burngreave TARA. Come along to use computers, WIFI and of course borrow books, ... [Read more]
10:00 am Tool bank open
Tool bank open
Feb 22 @ 10:00 am – 12:00 pm
You can find the Green City Action tool bank round the back of Abbeyfield Park House. Tools large and small, as well as garden equipment available to hire at bargain prices. No need to spend ... [Read more]
12:00 pm Bit Fix it
Bit Fix it
Feb 22 @ 12:00 pm – 3:00 pm
Our Saturday sessions at Abbeyfield Park House are Pay-As-You-Can and our visiting professional service costs £20/h for individuals, £30/h for organisations after the initial free diagnosis. email info@bitfixit.org.uk or call 0114 299 4575
12:30 pm Pitsmoor Adventure Playground @ Pitsmoor a
Pitsmoor Adventure Playground @ Pitsmoor a
Feb 22 @ 12:30 pm – 3:30 pm
Pitsmoor Adventure Playground is now run by a charitable organisation set up by local people, and is as popular as it’s ever been. Qualified staff are on site during opening hours to ensure a safe ... [Read more]
5:00 pm Mothers of Burngreave Youth Club
Mothers of Burngreave Youth Club
Feb 22 @ 5:00 pm – 7:00 pm
For ages 8—18 (under 8s with mother) Donations welcome Please contact mosburngreave@gmail.com
View Calendar