Pakistani communities throughout Sheffield celebrated 70 years of independence from British rule on 14th August. Celebrations on Monday 14th of August were held at the Pakistan Muslim Centre, Eastern Eye on Firth Park Road, and outside City Hall culminating in a meal at the Town Hall.

The aim of each event was both to celebrate Pakistani independence and to educate people about the devastating process of partitioning Pakistan and India. 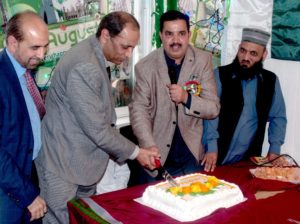 “In my village there were many Hindus and we lived side by side without any animosity. The Hindu community were landowners and shopkeepers. I can remember we helped a number of these individuals to escape and we protected them as they were our employers”.

“I was 8 years old when the partition took place. All I can remember is the fires that were burning in the local town. Shops belonging to the Hindus had been set alight. My friends and I went to see what was happening and when the army came we just ran away.”

Mohammed Iqbal vividly remembers his early life before the partition:

“My mother sent me to a school that was run by Sikhs. I heard that the teachers fled overnight and the school never reopened.”

Abdul Razaq was born in Bombay (now Mumbai, India) where his father ran a business but was visiting family on the Pakistan side of the border when partition happened. He was just 6 years old at the time commented that: