Born in Hyderabad (a four-hundred year-old city in India), Mohammed started to keep pigeons from the age of seven. You may be surprised to learn that it is a common past-time in India and pigeons are kept in large market squares. They are not seen as a nuisance as they would be here. This is the sort of place that Mohammed bought his first pigeons at the age of nine and started a lifelong hobby. 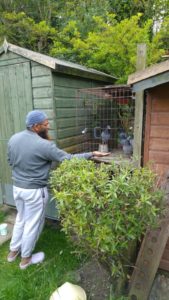 However, when he moved to England he could not bring his pigeons with him. It was not until, in 2012, when Mohammed’s two-and-a-half year-old daughter pointed to pictures of pigeons on the internet, that he was encouraged to invest in some good-old Yorkshire pigeons. He has now acquired a veritable flock and has built several huts for them.

Mohammed has been a frequent user of the Tool Bank at Abbeyfield Park and has used a variety of tools for work on his huts and for other DIY tasks. He says:

“It’s a fantastic way to help make your thoughts and ideas come true and be put into practice. It saves me having to buy tools that I would only use occasionally and I don’t have to worry about storing them.”

Mohammed, a genial and relaxed chap, also enjoys using the tools in itself and appreciates the social aspect of using the Tool Bank. Not only has he used the tools to attend to his pigeon huts, he has used them to build a gate for his new house out of waste stacking pallets. He is one of our most valued users at the Tool Bank. I’ve enjoyed discussing his various projects with him, what tools are best to use for the job and the best approach for a task.

The Tool Bank is part of Green City Action environmental charity. You can hire tools for DIY and gardening at very low prices from the Tool Bank on Saturdays between 10 and 12 at Abbeyfield Park House in Pitsmoor. If you’d like more information, or to enquire about our prices or equipment please email toolbank@greencityaction.org.uk or call 0114 244 0353

You can also hire our workshop space from £5 per session where you can use all our tools.