Story by Rohan, Haris and Hamza from 39th Sheffield Scouts

On 15th July, Gill Furniss, came to visit our Scout group and we interviewed her. This is what we found out:

Gill is a politician for the Labour Party representing the constituency (area) of Brightside and Hillsborough. She has been in the Labour Party for 30 years and a politician in the council for 20 years. She became a Member of Parliament (MP) in 2016 and works in London in the House of Commons. She goes on Monday and comes back on Thursday. There are 650 MPs in the House of Commons. On Friday, she works at her constituency office in Sheffield.

Gill was born in the Northern General Hospital in Sheffield. Her dad worked in the steel works. She grew up in Sheffield and went to Chaucer School and Parson Cross School.

She told us, “I love being a politician because I enjoy helping people and fighting for what is right.”

Her husband Harry Harpham, was a politician for the Labour Party. He was the Member of Parliament for Brightside and Hillsborough before Gill. Unfortunately, he died of cancer in February 2016.

We asked her if there are any things she doesn’t like about being an MP, she said, “The only thing I don’t like about my job is that I don’t get to spend as much time with my family as I would like to.”

The scouts group relies on volunteers getting involved and working with young people. It’s great fun! So if you would like to be a volunteer, please drop an email to 39sheffield@ gmail.com 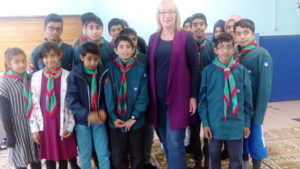