Parkwood Springs is an amazing natural ‘wild’ space close to the centre of the city of Sheffield. There is woodland and heath, open parkland, and a range of natural habitats. There are spectacular views over the city centre, the suburbs and the distant moors of the Peak District.

The land of ‘Old Parkwood’ was originally a deer park and hunting ground belonging to the Duke of Norfolk’s estate. In 1845 the building of the railway severed Old Parkwood from Neepsend. By 1861 there were 171 detached houses with large gardens on the site.

The 1860s/70s saw a huge growth of factories around the Neepsend area. Terraced houses and a lodging house were built to house railway workers. Further development included more housing, a recreation area, several shops, a pub, a church and a chapel. By this time with the gas works, the steel works and the railway depot, the area was heavily polluted, so the middle class families moved out.

All Barbara’s family lived on Parkwood Springs; she was born and brought up there. In 2014 she started to note down recollections as memoirs to pass on to her children and grandchildren. After discussing the lack of information on Parkwood with another ex villager, she sought help from local historians, Mel and Joan Jones. Then, whilst looking for her grandparents’ graves in Burngreave cemetery, she bought the Burngreave Voices book, which spurred her on to write about her place of birth on Parkwood Springs.

Barbara put an advert in the Sheffield Star, asking for ex villagers to get in touch, and a group of people emerged who were intensely interested in sharing their histories. A completely new seam of history has been opened up, friendships formed, and book sales have exceeded 300 copies. The book has been sent as far as Canada, Australia, and South Africa.

It’s a brilliant little book containing happy and hilarious memories of community spirit, a fishing club trip with Barbara’s Dad when the best ‘catch’ was a field full of mushrooms, DIY pantomimes and parties with the youth club. Tales of mischief include jumping into piles of soot, tying neighbours’ doorknobs together, and sliding down the hillside in tin baths. However, there are also many harsh memories – of hunger, early deaths, poverty and canings. During the war evacuees from London turned around and went back home when they realised that Sheffield was a prime bombing target. The book is a kaleidoscopic portrayal of many people’s lives on Parkwood Springs.

The book starts before the war, NHS, or welfare state. George Orwell had lodged in the village for three days in 1936 when he was researching his book The Road to Wigan Pier and was taken to see public buildings, slums and housing estates. Orwell reportedly said “You people are so strong willed, yet you don’t stand up to the upper classes.” After World War 2 people did demand better conditions, and so with the slum clearance programme, Parkwood Springs was earmarked for demolition and the area became the urban countryside we know today. Barbara’s book ends with a piece on the traveller community who currently live higher up the hillside of Parkwood Springs.

Copies of ‘The Lost Village of Parkwood Springs’ can be purchased at “Sheffield Scene”, Surrey St, S1 2LG – it is a wonderful and positive eye opener.

Forest Garden Gardening Sessions led by Tim Shortland are held on Parkwood Springs each month. The next session will be held on Saturday 14th October,11am to 2pm. Meet at 10.45am at the car-park on Cooks Wood Road/Shirecliffe Road. Bring a packed lunch. 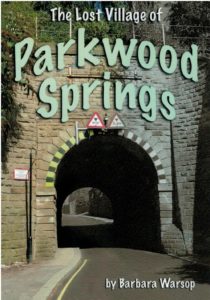