The Slovak Embassy came all the way from its London Headquarters to Fir Vale School. We are the only school in the country that they visited!

The Enterprise Centre was chock-a-block with people from the local Slovakian community, parents and carers from different cultures, as well as people from as far away as Manchester, who came to the school for our coffee morning on 27th September. There were four Consuls who talked about the role of the Embassy.

The room was very busy, with three workstations, where people had the opportunity to apply for a passport, a Visa, or to legalise their business documents. There was even a mobile photo booth for passport photos. 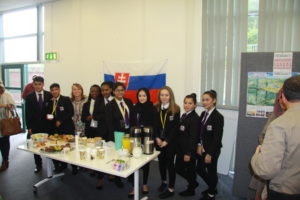 The coffee morning lasted two hours but the Consuls stayed all day talking to people. Students made them an international lunch of Slovak goulash, Asian dahl, chicken tikka, rice, and chapattis. The following day they visited Earl Marshall youth centre.

One parent asked for brochures about Slovakia saying “it’s amazing and thank you so much for this eye opener”.

At the coffee morning, there were also activities about lessons, for parents to get to know what their children do in their lessons, such as Maths, English and Languages. Parents could also talk to the Head teacher and take away information.

Please keep an eye out on the Fir Vale school Facebook for details of upcoming events.