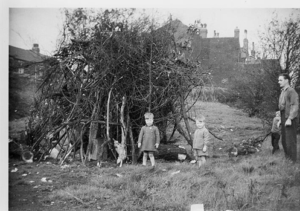 … the 5th of November, or so the old rhyme goes. I do wonder what people new to this country would make of a festive culture that involves the building of a great big bonfire to burn an effigy of a man who died over 400 years ago. Then setting the night skies alight with fireworks to celebrate the survival of a long gone king.

Growing up in 1950s Pitsmoor I don’t think I knew why we did it, nor cared. I do remember begging my mother for old clothes to make a Guy, loading the finished product on the back of a set of old pushchair wheels on bits of wood from my dad’s shed and towing it round the pubs asking “Penny for the Guy, mister?”

Nowadays it’s trick or treating for Halloween (which we never celebrated), but for us it was bonfire night. Our aim was to collect as much money as we could for fireworks. As late as 1981 a survey showed that as many as 23% of Sheffield kids had been ‘Penny for the Guying’ that year. Competition was stiﬀ.

There were no organised displays and no health and safety culture in those days. On the run-up to the big day we’d buy penny bangers and set them oﬀ in tin cans or break them open to get the gunpowder out and watch a cloud of smoke erupt around us as we pretended to be “Big Chief Kalamakooya” from the TV show Four Feather Falls. I never claimed to be sensible!

Then there was the bonfire itself. There were hundreds of them throughout Sheffield and from September we would be on the scrounge for bits of wood so that we could build the biggest bonfire in the area. There would even be daring raids to steal wood from rival bonfires to supplement our own. In some places rivals would even set light to others’ bonfires before the day to kill oﬀ the competition.

Come the big night the street gathered to watch the bonfire be lit and there would be Catherine Wheels, Jumping Jacks, rockets and bangers galore whilst poor old Guy said his farewell.

Bonfire toﬀee would be handed round by the mums along with marshmallows and sausages, which were cooked on the bonfire. The following day the air would be practically unbreathable from all the fires and fireworks of the night before.

Those days have gone now and part of me is glad, but I do cherish those childhood memories. Yes, I do remember the 5th of November.