Story and photos by Arianne Zajac | Illustration by Saleema Imam

For the second time this year the honey extraction process has been carried out by the Burngreave Cemetery Chapel beekeepers. The process involves removing the honey from the beehives, filtering, and packaging it so it is ready to eat, and is done in the Adventure Playground kitchen.

Honey is filtered. Twice a year enough honey has built up for it to be extracted. The process involves three stages. Firstly wax is ‘skimmed’ or ‘scraped’ off the frames. The wax is important as it seals in the honey so by removing the wax you can access the honey. Secondly the frames are put into the extractor, which is like a giant tub to be spun round. By spinning the tub the honey is pulled out of the frames and collects at the bottom of the extractor, leaving the frames empty.

The third stage involves removing any final small bits of wax, so that the honey is ready to eat. The extractor has a small tap at the bottom which will release the honey, to be poured through a filter. Then it is ready to be put into jars and sold at the chapel.

One beehive can contain up 60,000 bees! If the bees have filled up all the frames up to 24 jars of honey can be produced. In this extraction process eight frames were used which can make between sixteen and eighteen jars of honey. This honey is “pure honey”, which hasn’t been treated or had anything else added to it. And honey never goes off so it will taste just as good years later!

Although the honey extraction process is done only twice a year, the hives have to be inspected every week. If you would like to get involved please contact Saleema.Imam141@googlemail.com 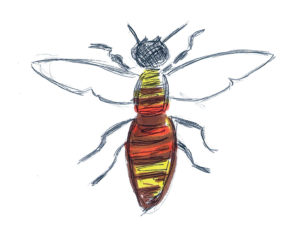