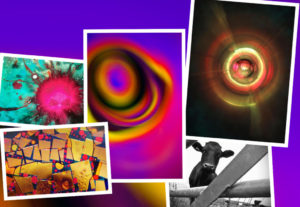 I first met Alan Blay at a party. Conversation wasn’t really flowing, so I resorted to asking “what do you do?” Apparently, he repairs induction furnaces… not a very promising conversational direction, but he also did a bit of photography. After some persuading, he finally showed me some images from his phone. They were not what I was expecting. 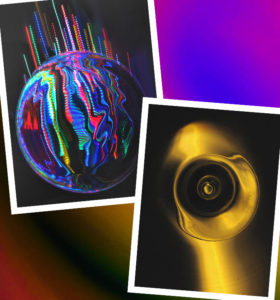 Bizarre abstract colour explosions, galactic collisions, weird psychedelia. Oh, and a cow. Alan described how he had made these images, using LEDs, glow sticks, assorted junk and kitchen utensils, but I didn’t really understand. I assumed the images were heavily digitally manipulated, but no. Alan might adjust the contrast and saturation a little. He certainly carefully crops his images, but rarely uses filters or effects. As Alan says, “I have tried digital imagery, but it doesn’t really interest me”. I invited him round to demonstrate his techniques, and he brought this enormous box of bits and pieces. 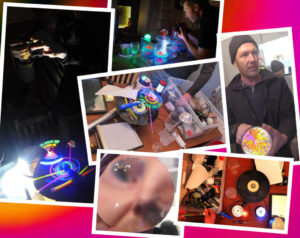 The first object he pulled out, was a spindly motorised turntable, made of an old vinyl LP and various bits of toys and junk. On top of this he laid some glow sticks, and above that, a handheld whirling LED toy. We turned out the lights, switched on his devices, and within a minute, using camera moves and long exposures, he was producing images like these.

Alan has been steadily chasing his own aesthetic for many years now, and knows what works and what won’t. He spends many hours taking hundreds of pictures, and rejecting the vast majority of them, always seeking that image he knows is in there. 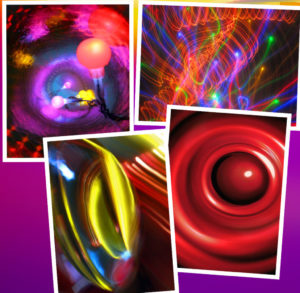 He expects and receives little attention; he doesn’t show his work to others, he certainly never exhibits. A compulsive creative, driven to produce these images for the sake of it, he’s on his own journey. Is he an artist? Yes I think so. You may disagree. Either way Alan doesn’t care. He is away, exploring his own vast territory. We were long left behind. Alan Blay, in Burngreave, boldly going.