There was standing room only for the latest film from Fir Vale Community Hub’s Digital Media Centre.

‘Pioneers – Made in Sheffield’ is a documentary about the first generation of Pakistani migrants to Sheffield in the fifties, sixties and seventies. It was shown as part of ‘One Day Without Us’ – a national day of action, celebrating the contributions made by migrants in the UK.

Bilal Jamil from the Public Speaking Association presented the film as “a celebration of those humble people,” and reminding us that “a society without history is a society that is lost.” He then introduced director Shahid Ali, who told the audience how he came to make Pioneers. “I’m not a film-maker, I just had an idea” he said. A mental health worker, it was only when he discovered his grandfather had been a member of the British Indian Army during the second world war, that he realised that so many of that generation’s stories were untold.

So many of the people in the film told a similar story of how they came to the city. Often migrating under the so-called ‘voucher scheme’ which gave the chance, for those already in the UK, to arrange jobs and vouchers for their relatives, they arrived to work in Sheffield’s factories and steelworks. 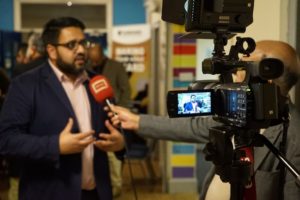 One phrase was repeated over and over – “hard work”. Whether it was the hours of work, or the labour itself, these pioneers were all made to sweat to earn their keep. Many of the interviewees told of coming over with at least one degree, but still only being able to get jobs fuelling the steelmills, or driving buses.

But there was levity amidst the hardship, with recollections of the Pavilion Cinema in Attercliffe, and of the commonly held dream of owning a Datsun, bringing gales of laughter.

Hub manager Gulnaz Hussain proudly spoke, to say how pleased she was with the centre’s fourth film, and the opportunity it gave to pay tribute to the elders of the community and the foundations that they built.

The centre’s previous films have been ‘Time for Change’, made in partnership with Sheffield Mind and the Sheffield Health & Social Care Team, ‘Genetic Literacy and Raising Awareness’, made with the University of Sheffield, and ‘Show the Good in Firvale’. They, and Pioneers, can all be seen by contacting Fir Vale Community Hub.