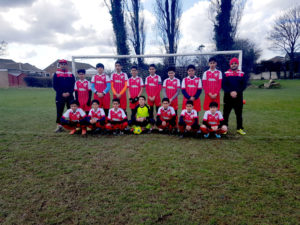 Story and photo by Anise Ahmed

As we go to print, local team Aden Steelers Under-12s are preparing to play in their biggest game of the year, the Sheffield & District Junior League U12 Demitasse final held at Greasbrough Youth Football Club in Rotherham.

The team battled to a hard fought win against Chapeltown Athletic, who sit comfortably top of their league. It was 2-2 going into the closing stages of the game, following goals from Marwan Ali Haroun and Nader Mokaden.

But Mohammed Towheed got a wonderful goal in stoppage time to win the match, 3-2. League leaders, Sheffield United Girls RTC, won the other semi and meet the Steelers in the final.

The Steelers played a proud part in the community as well as on the pitch. Saleh Alnoud, Aden Steelers chairman said: ”We have not only given these young people the opportunity to realise their footballing potential but we have also identified issues affecting these young people and tackled them head on and in a way which suits their specific needs and expectations.

Meanwhile, the U13s lost out in extra time in their semifinal, being on the wrong end of another 3-2 scoreline.