Story by Graham Jones | Courtesy of Toby Walker of Soulwalking.co.uk

One day in the eighties my wife, Linda, came back from a picket line at Nether Edge Hospital and told me about a man, Dave Godin, an anarchist, who had gone to support a nurses’ strike. She kept bumping into him at a number of political events and started to tell me a little about this man’s amazing life.

I didn’t believe a word of it and I resented this bigmouth lying to my wife.

When I met Dave, I realised that this man was actually very modest and unassuming but he had been a courageous trailblazer and had bravely stood up for those things that he passionately believed in all his 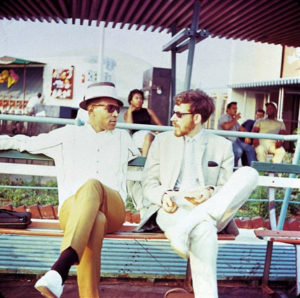 life. He also turned out to live nearby on Norwood Road, Pitsmoor.

Dave was born in 1936 and went to school in Dartford, Kent. He developed a love of black American music in the 1950s when it was very hard to access this kind of music in the UK. As Dave wrote:

“I heard ‘Mama, He Treats Your Daughter Mean’ by Ruth Brown, and was transfixed by something I’d never ever before heard the likes of! I went to the juke-box to see what this magnificent record was, and one of the young men who had put it on, told me what it was, and explained it was ‘R&B music’.”

A couple of younger kids at his school were playing their guitars, and Dave told them to listen to some real music. They were Mick Jagger and Keith Richard of the future Rolling Stones. Fifty years later, Keith Richard wrote about the massive musical debt they owed to Dave, but spelled his name wrong!

As a teenager, Dave declared himself a vegan and a pacifist and became a conscientious objector. He learned Esperanto and Russian. He also bravely came out as openly gay at a time of widespread homophobia. He was passionate about human and animal rights all his life.

With the coming of the 1960’s, black music from the USA became more popular in Britain. Dave railed against the injustice of those UK white performers, including the Rolling Stones, who cynically exploited this music to further their own careers.

But there were others who had a genuine respect for this musical heritage and its performers. Dusty Springfield was firmly in the latter category, refusing to play in front of segregated audiences in South Africa, for example.

He wrote directly to Berry Gordy, the manager of Motown, in Detroit.

Gordy sent him a telegram back inviting him to visit, and fol-lowed up with a plane ticket. Dave met all the Motown stars, but reportedly went hungry because of his vegan principles! Nevertheless, he was appointed Motown’s ambassador to the UK.

Dave’s encyclopaedic knowledge of soul music, his fierce commitment to the crusade of black music and his witty turn of phrase led to him writing regular columns in a number of music papers. It was Dave who first uttered the term ‘Deep Soul’, who gave birth to the phrase ‘Northern Soul’.

Apart from music, Dave was passionate about films, especially post-revolutionary Russian cinema, and became friends with Marilyn Monroe whilst in California. Dave came to Sheffield in 1978 to study film at the polytechnic, and until 1990 was the manager at Sheffield’s Anvil cinema, the only council run cinema in the country.

He proudly described himself as an anarchist and he supported anarchist newspapers such as ‘Class War’ and ‘Black Flag’. This ensured that his membership of Burngreave Labour Party was not without its challenges, although it was ill health in 1990 which forced him to resign.

In his later years Dave compiled four CDs for the Kent label entitled ‘Dave Godin’s Deep Soul Treasures’ and he regarded this as his greatest achievement. These are now

collectors’ items in their own right.

Dave died in 2004. Characteristically, a donkey sanctuary was a major beneficiary in his will.

“Dave was the kindest, fairest, caring man and it broke my heart when he died. He was totally committed to every bloody lost cause!”

As Dave would have said:

“Keep the faith; right on now”.

He was a true soul treasure.