Joe Brown,who came to Sheffield from Jamaica in August 1960, has passed away, aged 70. He attended Burngreave Secondary Modern before going to work at Brown Bayley Steels. Whilst at school, he met Ted and Leroy Walcott, and they began performing together under a variety of names before deciding upon Pitiful Souls.

Joe was the lead guitarist and vocalist, playing regularly around Sheffield. They won the local leg of the ‘Search for Sound’ competition, which took them to Streatham Ice Rink for the national final. They came third and won £50 and an EMI recording contract.

The band played regularly at the King Mojo Club, on Pitsmoor Road; and its owner, Peter Stringfellow, became their manager. Joe was one of the band members five years ago for the Leadmill’s Golden Jubilee gig in Stringfellow’s honour. 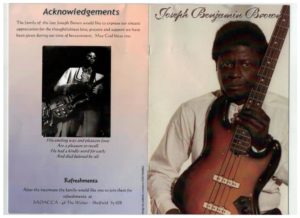 After the Streatham gig, the band cut their only record, ‘Never Like This Before’, which appeared on the Rag Goes Mad at the Mojo EP, alongside the first recording by one Joe Cocker. They enjoyed more success abroad than at home, touring Europe and the Far East. “It was only meant to be six months, but we spent eight years” recalled Ted. Asked why they toured the Far East so much, the answer was simple – “we liked the sun.”

After the band split, in 1980, Joe carried on playing g

uitar in several bands, and remained good friends with his former Pitiful bandmates.

Joe passed away on 24th January, from pancreatic cancer. He left no close family, but his friends wish to thank everyone who came out to attend his funeral.