Story and photo by Liz Smith

Katrina Love and Victoria Smith recently took part in the first ever Concert Band Varsity Battle of the Bands, a competition between the Students’ Union of both Sheffield universities.

Katrina and Victoria were born and raised in Pitsmoor. They attended St Catherine’s Catholic primary school, where they had music lessons and developed their love of music. They played in the school bands when they moved to Notre Dame high school, and were then delighted to have the opportunity to join the concert band at Sheffield Hallam University, where they both study engineering. 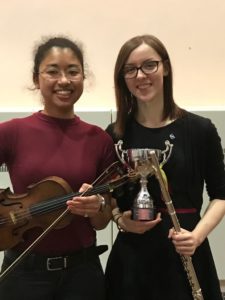 Each band played a number of pieces from different genres, including from Mary Poppins and Les Miserables. After an audience vote, Sheffield Hallam University were announced the winner! The two bands came together to play Hootenanny and music from the Lion King, they were brilliant! Both bands worked really hard to prepare and perform, and at the event they raised £468, with half of the proceeds going to the charity Music in Hospitals and Care (MiHC).

MiHC brings interactive live music sessions to people who are receiving care or treatment in healthcare settings across the UK. They aim to make people feel good, one tune at a time. They organise around 4,500 music sessions a year for people of all ages receiving care or treatment for an illness or disability. You can find out more about them at https://mihc.org.uk.

Victoria has been playing flute for eleven years. Katrina has been playing violin for over twelve years, she is still playing the instrument that was purchased using a grant from Burngreave New Deal for Communities.