The 39th Sheffield Shirecliffe cubs took part in the Scrap Heap Challenge on Saturday 17th March at the 231st scout hut. We were given the task of building something out of scrap and the theme was winter. It was our first time taking part so we did not know what we were in for.

There were ten cub teams participating that were all from Don district, they all had designs on paper that looked interesting. In our team was Siraaj, Adam, Ibrahim, Raheem, Muneeb and Umar.

We asked our parents to collect any useful recycling items such as cardboard, cans, wool, anything that we could use to make our model. All the groups put the items they brought in the middle of the floor and were asked to take things they needed for their masterpieces.

Our team made a winter wonderland, it consisted of an ice ring, igloo, winter house, bobsleigh and a sledge which we put together on a white base with trees. Everybody was given a task to do.

Siraaj made an igloo using a scrap bowl with tissue paper and PVA glue. He used talcum powder for snow. “I had lots of fun and it was messy” he said.

Umar made an ice ring using cotton wool, pipecleaners and scrap paper as a base. He said “I was overjoyed when I heard we had won first place”

Ibrahim made the bobsleigh using a toilet roll and paper. He painted it red. “I didn’t think we would win because everyone had big designs. When we won I was overwhelmed with joy”

Raheem made a sledge. He stated “We made lots of different things, but the other group only made one big item. We all tried our best and helped each other. Working as a team helped us win”

We all had a fun time and thanks to all those who organised the event and made us think about recycling. We look forward to the next event. 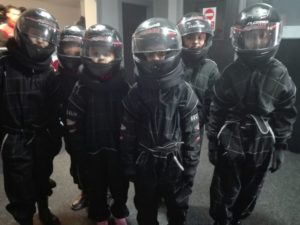 The group also went for an overnight camping trip to Hesley Woods, and the Beaver group went go-karting at Avago Karting in Rotherham, which they all found very exciting, even if they were a little nervous.