We, 39th Sheffield scouts section, travelled for an overnight camp at Hesley Wood like no other on Wednesday 4th of April.

We arrived at 2:00pm and began to pitch our tents where we would stay for the night. The weather was against us and whilst we were pitching the tents, it began to rain, which pressured us to hurry up to ensure that our tents would have no water in them, as we wouldn’t want to be sleeping in puddles!

While some of us pitched the remaining tents, others helped to prepare the meal which was chicken wraps and wedges. Annoyingly, the rain persisted throughout the night cancelling some of our plans of den building and a campfire. However, we departed to our tents and played board games as a group. 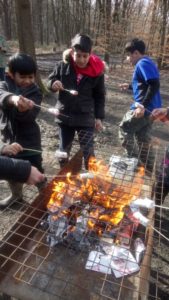 r ‘lights-out’ time was 10:30pm but most of us didn’t sleep until later into the night (I ean early morning!) playing games and eating snacks and sweets. The next day we had 2 activities booked for us. We had crate stacking and axe-throwing. The boys did crate stacking first whilst the girls did axe-throwing and then we swapped over.

Our leader said: ‘I have never seen such good teamwork before’ whilst the boys were on crate-stacking. Axe-throwing was throwing small angel axes at a wooden board with smaller logs attached. After our activities we had lunch which was warm soup with bread rolls and sandwiches. Overall the camp was a great camp with scouts showing great attitude and co-operation. Some of us stayed behind after to pack away the tents and were rewarded with roasting marshmallows over a fire!

‘I enjoyed it thoroughly and I would do it again if I could but with better weather!’

Haamid said: ‘I enjoyed it and it was a great experience’

We would like to thank all the leaders and helpers who made this camp such a success.