Story and photo by Zia Khan

On 28th April, Fir Vale based group, An Nasiha (Sincere Guidance) organised a demonstration in the city centre with the message ‘Islam says no to racism.’

Distributing balloons, stickers and messages of harmony with people of all backgrounds, the group promoted the message ‘Race against racism: no superiority of race except through piety and good actions.’ 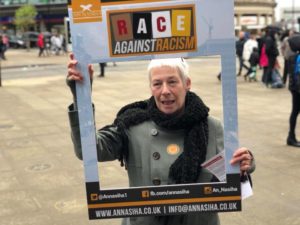 They were supported by many members of the public and dignitaries such as the (then) Lord Mayor Anne Murphy, and city centre MP, Paul Blomfield. Speaking to the crowd, organiser Zia Khan said:

“We’ve met many different people of many different backgrounds. We are able to engage with people, telling that Islam says no to racism. We wanted to go out there and show that we say no to any kind of racism, whether it be black on black, white on white, black on white or whatever.”

An Nasiha was founded in 2011, by a group of local students. They have held public events in mosques and community centres up and down the UK with many renowned as well as upcoming scholars coming from all over the country to give speeches and seminars.

For further information about An Nasiha, see their website www.annasiha.co.uk