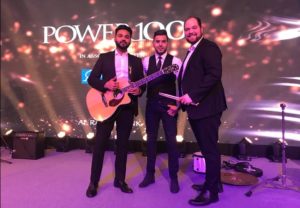 Ahmad Hussain, who was born and brought up on Barnsley Road, has been named on the Muslim 100 Power list. He joins other influential Muslims awarded this honour such as Sadiq Khan, Sir Mo Farah, Nadiya Hussain and Zayn Malik to name a few.

The Muslim 100 Power list honours “the very highest levels of achievement within the global Muslim community and positively promote the outstanding contribution made by these individuals on a local, national and international level.”

Internationally renowned Ahmad Hussain who is of Kashmiri-Pakistani descent, is a singer and songwriter in the Nasheed tradition. This style of singing draws inspiration from Islamic beliefs, history and religion as well as current events.

Ahmad was born in 1981 and attended Hucklow Primary School. He set up IQRA Promotions as a medium for promoting peace and unity through performance in 2004, but it was following the sudden death of his sister at the age of only 28 that he began to explore his faith more deeply.

He released his first single ‘Aye Khuda’ in 2009 and his debut album ‘I Turn to You’ in 2010. He expressed himself through inspirational Nasheeds in English, Urdu and Arabic. His second album ‘My Beloved’, a moving tribute to his mother who had been diagnosed with cancer, was released in 2014.

Ahmad has performed in many countries around the world including Turkey, South Africa, USA, Morocco and Trinidad to name a few. He has shared the stage with celebrated performers including Maher Zain and Outlandish and inspirational speakers such as Attallah Shabazz, the daughter of Malcolm X.

The awards ceremony was held in central London at the Intercontinental, Park Lane. Ahmad was humbled by the recognition adding:

“I have for many years promoted peace, love and harmony through my music and have supported many charitable initiatives locally and globally, it as an honour to be recognised and I am humbled to be able to represent Sheffield at such a prestigious event and in front of the worlds media.”

Ahmad continues to maintain links to the community and supports global and local charities. He sings to a group of elders who suffer from dementia, he also did a sleep out on the coldest night of the year to raise funds and awareness for the homeless.

Ahmad has just released his fourth studio album entitled ‘Dua’, a collection of spiritually uplifting songs and is available to download on all digital media platforms or from www.ahmadhussain.com

His expression through words in the performance and writing Nasheeds was born from the inspiration he received from the first revelation of the angel Gabriel to the Prophet Muhammed (peace be upon him): Proclaim! (IQRA) in the name of your Lord who created: Created man from a clinging substance: Recite, and your Lord is the most Generous,– Quran 96: 1-3