Mikron Theatre Company brought their play ‘Revolting Women’ to Grimesthorpe Allotments. I had expected a one act amateur production with a few spectators not the professionalism and talent, which flowed in abundance off the stage.

The cast, comprising two men and two women, played various instruments and wore a range of costumes playing numerous characters each. The costume changes and character changes flowed flawlessly like an exquisite dance. A brilliant example of how important timing is.

There was a terrific turnout, with all seats taken and lots left standing, and queues for the refreshments of hotdogs, tea and cake.

The pre-performance entertainment was a man running up and down trying to blow up an inflatable settee: it kept us occupied until the show started.

The performance was all about the suffragist movement starting in 1911 and ending in 1918. It showed Sylvia Pankhurst and her attempts to get a better life for women through non-violent agitation. However her mother and sisters had antics that were more violent. I had heard of Emmeline Pankhurst but I had never heard of her daughters Christabel and Sylvia.

It made me think of how far we have come in such a relatively short space of time. When my grandad was born in 1914 no women and only some men had the vote. In 1918 all men over 21 and those returning from war got the vote, as well as some women over 35 years of age. 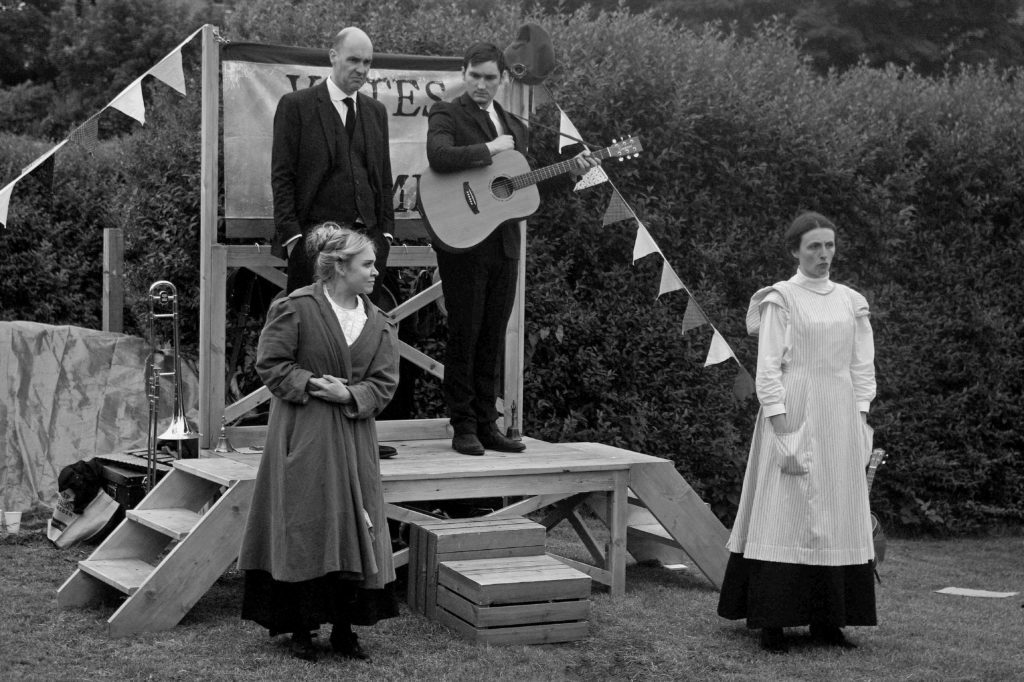 This was a wonderful interactive way to learn about history. I personally would like to see it performed in schools, bringing history to life.

The few children present laughed aloud while the adults were to be heard chuckling to themselves.

Mikron has been running for 47 years, and will put on 130 shows this year. The cast stated they like feeling at one with the audience and performing in different places to people who would not normally go to the theatre. Their next performance is on a barge.

Thinking of joining them? They hold auditions, and applicants must be able to play at least two instruments. Alongside this play, they are performing ‘Get Well Soon’ about the NHS, in October at Marsden.

To find out more about Mikron see their website at www.mikron.org.uk