Story and photo by James Woollen 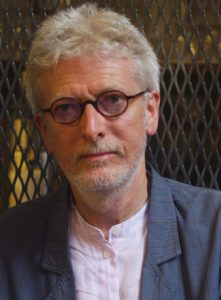 I met Michael Glover, author of ‘111 Places to visit in Sheffield that you shouldn’t miss’ at the Tampers Sellers Wheel, an Artisan café bar located on Arundel Street, which also featured in his book.

Michael comes from Sheffield and was educated at Fir Vale School. He has fond memories of the area – especially walking up Wincobank hill and looking down into the Don Valley, seeing the heavy industries, the steel works flames and smoke. I asked Michael what his favourite destination was and he replied that it was the Norman Fort at High Bradfield, because it is invisible until you come upon it. People sometimes do not appreciate that Sheffield is full of dramatic countryside.

I also found out from Michael that there was a dispute surrounding the destination of the book, as the London based publishers said “No, Sheffield does not deserve one, why not write one about the Peak District, as they have ten million visitors a year?” A week later the German publishers gave the go ahead, and now it is a Waterstones best seller.

The book successfully reflects Michael’s artistic writing style as a published poet, and is further complemented by the visually stunning photography of Richard Anderson.