Story and photo by Richard Belbin

Local man, Abdirahman Ahmed Ali is fundraising to release a physical version of his Somali language ebook Nolasha Iyo Noocyadeeda [A Different Kind of Life], which is available now from lulu.com.

Ali was born in 1970 in Garadag, in the Sanaag region of Somaliland. At a young age, his family decided to move to Burao, Somaliland’s second city. He then had spells living in the UAE and the Philippines, before he did

and moved to the UK.

He chose the UK for several reasons, first and foremost being the large Somali community here. Secondly, he wanted to attend a good university and learn English. Unfortunately once there, he started to hang out with the wrong crowd.

“I developed chains of self-defeating bad habits that were hard to break and led from stress to depression. So I never completed my studies.”

Eventually, he went back to Somaliland and this trip back to his motherland has helped him to put his life back together and to heal the wounds from depression.

From these experiences he started to write Nolasha Iyo Noocyadeeda, to try to stop other Somali youth from making the same mistakes. 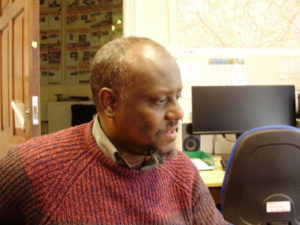 “Too many young Somali people are at risk from gangs and knife crime. I wanted to explain how to be safe, in order to avoid the dangers, you must know what they are. “I want to try to help people avoid the pitfalls I fell into. That is why I want to get my book published and distributed as widely as possible”