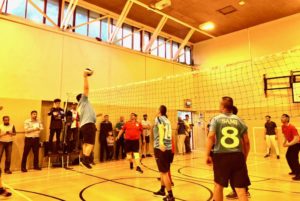 For the third year in a row, the Southern Youth Forum (SYF) held a 4 week volleyball tournament in Verdon Recreation Centre. The league had the active participation of teams from all communities of Burngreave and culminated on Thursday 13 June with the crowning of the Aden Port team as league champions.

The trophy for the best player in the tournament went to the talented Nadhmi Hageb (Altelal), and the trophy for the most improved player to Qamdan Mohammed (Aden Port). Captain Sami Nuwaiji received the winners’ trophy (given in memory of Abdullah Allawi) on behalf of the Port team.

Chair of the SYF, Hamdi Ahmed Mohsen, told the Messenger:

“There is real shortage of sports activities for our young people in Burngreave. Crime levels in Burngreave are high, with 185 crimes recorded in April alone. Our youth are now in danger of just hanging around on the streets of Burngreave. Our weekly volleyball sessions now provide a safe haven for a lot of our youths. We in SYF are sure that it is their only escape from running around on the streets and doing negative things.”