Over 100 people turned out for the Sheffield Litter Pickers organised pick around Firth Park Road and Page Hall on Saturday 23rd June, including groups from the 39th Scouts and several councillors.

Litter pickers, bags and high visibility jackets were provided by Amey and the team got on with the job. Children were shown how to use the pickers by their parents, which can only offer encouragement for them to not drop litter themselves. The area was a ‘total mess’ as one resident put it, but after over two hours there had been a noticeable difference.

One of the main problems is that one of the bus stops on Firth Park Road does not have a litter bin. This leads to the adjacent houses having their gateways and front gardens being used as bins instead. Amey should empty bins when they are 75% full, but these are nearly always absolutely full which only encourages the dropping of rubbish.

Many businesses in Page Hall are take-away establishments, and much of the rubbish was take-away cartons, plastic forks and remnants of food. “I’m fed up picking up chicken bones,” I was told. 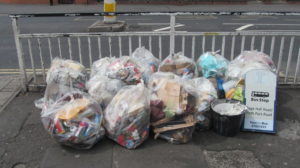 As the team finished, going down Firth Park Road, there was a lot of positive support from people in passing vehicles and residents. One man again said that his small front garden was just used as a bin by passers-by. I helped his son (about 10 years old) clear the worst of it.

See the Facebook group Sheffield Litter Pickers for details of further clean ups nearby, and across the city.

As well as the litter pickers, local youth charity Endeavour has also been working with local artist Sarah Jane Palmer to create art from litter collected from the local community.

Find out more about Sarah’s work at www.sarahjanepalmer.co.uk

You can watch a video Sarah made for the project here: https://youtu.be/yv6FBL2IEFU