Local therapeutic horticulture and arts mental health charity, SAGE Greenfingers, had a fantastic day in Bridlington on 28 June 2018, for their annual summer outing.

The group members, volunteers and staff travelled by coach, arriving at the sea front to be greeted by glorious weather. 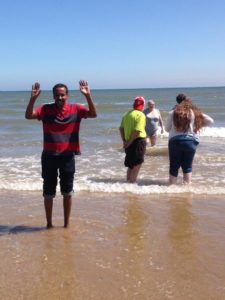 We variously enjoyed cricket and boules on the beach, paddling and swimming in the sea, walking along the headland, a £1 trip on a ‘pirate boat’ and, of course, fish and chips.

Alan, who comes to our Tuesday group, said

“It was an experience I wouldn’t have got without SAGE; it broke up the monotony of being left alone at home that Thursday. It was a fantastic day. The people I was with, they all cared for each other. I first heard about SAGE when listening to one of their team talking about the project on Toby Foster’s show on Radio Sheffield. Since then, I’ve attended every week and I would advise anyone with mental health difficulties to go to SAGE.”

Mohammed, from our Thursday group, said that the Bridlington trip was

“a great day out. It was the first time I have seen the sea in England, since arriving here in 2000.” 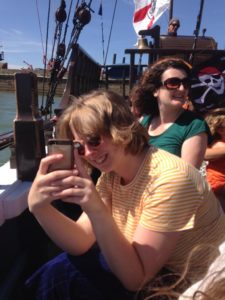 “I liked the trip, particularly the beach, pirate boat and fish and chips”.