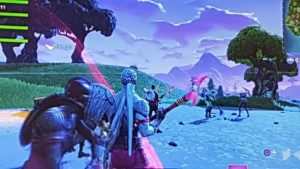 The following piece is the second of our series of articles in collaboration with Ellesmere Youth Project, looking at topics beyond Burngreave that matter to young people.

The 21st century has seen extreme advances in technology, one of the biggest of which is in gaming. It has become a part of most teenagers and many adults’ daily routine. This can then lead to both positive and negative effects.

Many scientists and psychologists find that video games actually help make children smarter. They can change the brain’s physical structure in the same way as learning to read or playing a musical instrument do. Playing games can improve hand eye coordination and problem solving – ‘don’t sit so close to the TV’ no longer applies!

On the other hand, video games are often frowned upon as ‘time wasters’ -‘gaming disorder’ is a newly listed mental health condition by the World Health Organisation. It’s hard to get enough active play and exercise if you’re always inside playing video games. Violent video games are easily blamed by the media as the reason why some young people become violent or commit anti-social behaviour.

An example of a very popular game is one called Fortnite. Fortnite involves being dropped onto an island where you have to kill other players to become the last man standing. Over 3 million people played the game in February, and the current figure will be even larger.

Games are short, so when you are killed, you can be playing again in a minute. This can then lead to an addiction, as one local teenager said “if I was allowed I would probably play for 8 hours nonstop.”

The effects of video games depend on several factors, the most major one being you and how you play the game. We believe that video games have little to no effect on you mentally, but what you do and how you react can.