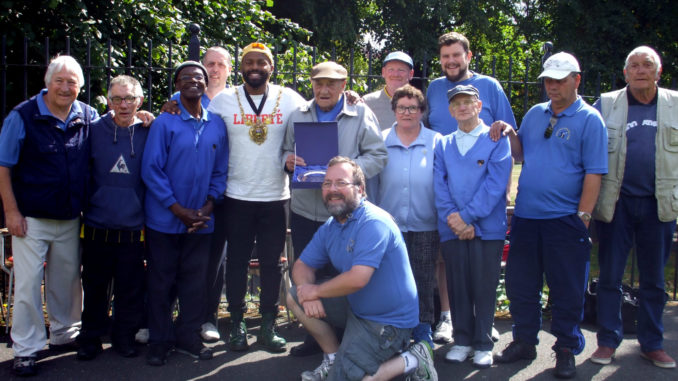 The Lord Mayor, Magid Magid, joined the Abbeyfield Bowlers on Saturday August 25, as they took on Stocksbridge B team.

Magid was there to present club secretary, Stan Tew, with a silver platter in recognition of his long service to the club. Stan began playing when he was 18, nearly 70 years ago, and has been a stalwart for Abbeyfield ever since. Even at the age of 86, he is still captain of the over-60s ‘Veterans’ team. When asked why he started playing he told the Messenger:

“It was a Saturday, the club were one player short, would I play? Since that day I’ve never stopped, although I couldn’t play as much when the children were young, and I was working long hours. I love the game.”

As well as the presentation, the Mayor also had a try at the sport itself. Following an introduction by club captain Neil Fletcher, Magid adopted the fixed stance of the bowler and chanced his arm. After a couple of ‘roll ups’ (practise ends) he quickly found his line and length and even won a couple of ends. 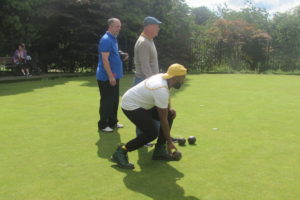 Asked how he felt about the game, he told us:

“I’ve not played before, but I might well do again, it’s very competitive.”

The Mayor’s visit inspired Abbeyfield to an 8-4 victory. The club are always on the lookout for new members. If you are interested, please visit www.abbeyfieldbc.co.uk or email info@abbeyfieldbc.co.uk