Universal Credit (UC) will be implemented in Burngreave from November and December 2018.

The Messenger will be reporting on various aspects of its implementation over the coming issues, starting with a description of how UC works, the steps people need to take to claim UC and on the campaigns that are fighting to get UC abolished or paused.

When UC is introduced, any new claims for ‘legacy’ benefits’ (Income Support, ESA, JSA, Housing Benefits & Working Tax Credits), will instead be required to make an application for UC. At least 60,000 people in Sheffield will eventually claim Universal Credit. At some point everyone receiving legacy benefits will be moved onto UC. There is no date for this yet, but the Government’s intention is to finish the whole process by 2023.

The ‘default position’ with UC is making one monthly payment to a household, including housing costs, paid in arrears. People will then pay their rent, bills and other costs from that payment. UC is applied for and managed online. Different arrangements can be made for vulnerable people.

Whilst some will find the system straightforward, there is a risk that others will struggle with the additional demands put on them by the new system. The fact that UC is paid monthly in arrears (resulting in at least a five week waiting period for their first payment) means people may struggle with managing their money to ensure that all rent and bills are paid. The online application will mean some find it difficult to get the regular access they need in order to apply for, and manage, their claim, or lack the digital skills needed.

People may be vulnerable due to other circumstances which make the transition particularly difficult. For those who are already struggling, this could push them into crisis. In addition, for some people with disabilities or health conditions, the move to UC will result in a reduction in income.

Derbyshire Unemployed Workers’ Centres (DUWC) conducted a survey of 100 UC claimants in the Chesterfield area eight months after the full digital roll out. The report makes grim reading and identifies a number of issues facing a significant number of people claiming the benefit.

Over half had a negative view of the new benefit and over a quarter had problems either claiming the benefit on-line or maintaining their claim through an on-line journal. 34 respondents said they had been put into debt by UC with some forced to use foodbanks to survive as well as borrowing from friends and family. Nearly a third of respondents said that they had been put into housing cost problems. As some of the 100 Would you credit it? Story by Carrie Hedderwick people interviewed were living with their parents, those with housing related problems totalled nearly a half of those who could be put into difficulties.

Here in Sheffield, a Universal Credit Partnership has been set up, with representatives from the Council, DWP, Citizens Advice Sheffield and other voluntary, community and faith organisations, to share knowledge and create links between the different strands of activity taking place to prepare for UC. For example, there will be personal budgeting and digital support available in job centres for UC claimants, and work is taking place to map and assess other advice and support that will be available to those who are struggling. 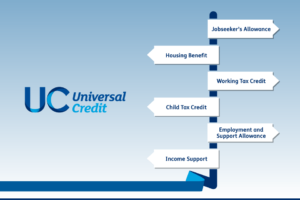