The Page Hall street wardens, more formally known as environmental enforcement officers, have been patrolling the area – as well as Grimesthorpe, Darnall and Tinsley – with the aim of improving the physical appearance of Sheffield’s environment.

The street wardens successfully reduce fear of crime and deter antisocial behaviour by patrolling the areas, reminding residents not to dump their unwanted belongings outside and fining those who do.

On the job, they go around and tape up anything that is a hazard and has been dumped in the streets. They look for evidence to locate the person responsible for it, to fine them. However, if they’re unable to, they simply log the crime on an app and photograph it. This information is then sent to an organisation called Streets Ahead, who pick up the litter within 48 hours. The yellow tape acts as a warning to others, which discourages them from littering more. Logging the crime saves time and makes patrolling more efficient for the wardens.

Having the wardens has been positive for the community as people sweep up their rubbish and if they’re asked to move their belongings from the streets they will without hesitation. This shows that locals respect the wardens and take on board what they’re saying; they change their littering habits. 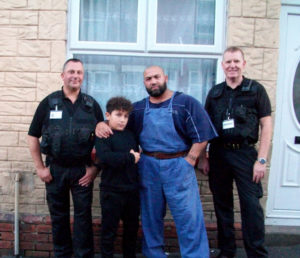