Soldiers in WWI would send letters, souvenirs and postcards back to their family and friends. Some of the most popular items sent back were hand embroidered postcards, known as WWI Silks, which had been created by French and Belgian women.

The postcards depicted here were sent back by soldiers serving on the western front, to members of their families in Pitsmoor. 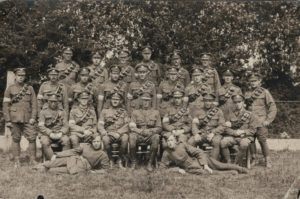 The family of Colin Levesley, pictured, and his in-laws, lived on Macro Street and Reginald Street beside the railway, streets now long gone in the 50’s slum clearance. Colin served in the Royal Field Artillery 98th Battery. His wife Lucy, nee Pickford, worked as a stoker in a munitions factory during the war.

Friends of Burngreave Cemetery are also displaying more such cards in the Cemetery Chapel, in their exhibition commemorating the end of WWI. The Chapel is open between 12 noon and 2pm on Sundays.