Please tell us a little about yourself, where you grew up, studied, how your personality was formed etc.

I grew up in a little village in Bedfordshire (between Bedford and Luton) and moved to Sheffield when I was 19 to study Plant Sciences (effectively Biology) at The University of Sheffield. The main reasons I chose Sheffield was the sense of community and how friendly the people are here, and also the proximity to the Peak District and how easy it is to be out in the countryside. I like to go fell running, wild camping and swimming in rivers and reservoirs, so Sheffield is ideal for this. I moved to Valencia in Spain for a one-year ERASMUS placement during my degree (and later returned for another year to live with my partner at the time). It was inspiring to see how strong people come together there to protest the issues that are important. It made me realise by comparison how little we seem to stand up for our rights in this country. But it hasn’t always been this way, and recognising the strength we collectively hold as a community we can change the world for the better.

When did your environmental conscious become awakened, is it connected to your profession as a soil scientist (which sounds interesting by the way)?

I guess I’ve always been motivated by environmental issues. My mum also shares this interest / pain, so we’ve sort of been walking this path together: chatting lots since I was a teenager about what we’re learning and debating opinions about what we can do about it. Studying biology at the university made me realise how it important it is that we do something about climate change and how our current lifestyles are so destructive to the wider environment. We learned about the studies and the evidence behind what’s going on. It’s not questionable or an opinion. It’s clear, scientific fact that we need to change our way of doing things. Now I work investigating allotments, soil and own-grown food. This is a good example of how lifestyle change are beneficial in many ways: growing your own food is a great way to be healthy, make friends and reduce your carbon footprint and be more sustainable.

Can you tell us the problem with Fracking?

Fracking – or ‘hydraulic fracturing’- is an unconventional way of extracting natural gas. A hole is drilled some 3 km down, through the water table, into shale rock. The structure of the shale rock is broken with explosive charges and lots of water, sand and toxic chemicals pumped down there at extremely high pressure. This releases the gas held in the shale rock which is then pumped to the surface. On a local scale, the casings of the drilled hole almost always break, meaning that this toxic cocktail of chemicals, gas and radioactive material contaminate the local water supply and soil. It’s a very industrial process, meaning that quiet country lanes suddenly have thousands of lorry movements. On a global scale, gas is a another fossil fuels that contributes to climate change. We need to be moving away from fossil fuels now, not exploiting another one, to avoid total catastrophe.

Can you tell us a little about your experience at Preston New Road fracking site, What was the atmosphere like? 73 hours and 27 minutes atop a big metal container sounds very challenging.

The community in Lancashire have been fighting fracking there for seven years. The council voted against it, but this decision was overturned by the central government. It goes to show how little democracy there is in this process: that the conventional means of communicating our opinion are being ignored. As a result, many local campaigners are turning to direct action – such as blockading the site entrance or climbing on lorries – as the last resort to stop this horrendous industry. The atmosphere at the protection camp there is always very friendly. The kettle is always on, and there is always someone to chat to and show new people around. Community has been the real strength of this campaign from the start. People of all walks of life are coming together to support each other in fighting this industry, and to have fun in the process!

The sentence you received was in most people’s eyes the only crime committed, what did it feel like to face it?

It was a real surprise to receive such a harsh sentence. We’d been warned by our barristers that this would be possible, but didn’t believe it would happen because it is so ridiculous. In prison, everyone was really supportive. All the other inmates knew who we were and why we were there because it had been on television. They agreed it was stupid that we had been sentenced to prison for peaceful protest.

What do you think the alternative is to fracking?

We need to change to renewable energy sources, such as wind and solar power. It is possible to do this now, as demonstrated by the Zero Carbon Britain report. The government subsides the fossil fuel industry millions of pounds every single day. If this was given to people to properly insulate their homes and put a solar panel on the roof, not only would we pollute less, the quality of life of normal people would dramatically increase.

Are you going to be keeping your head down from now on?

The issues of fracking, climate change and lack of democracy (among many other things) haven’t gone away so I’m still working to change things. Moreover, the industry are now trying to frack just outside Sheffield so the time to act is now. I’d encourage everyone to get involved: it´s amazing what we can do when we work together. Please feel free to contact me at frackjack@riseup.net if you’d like to find out more! 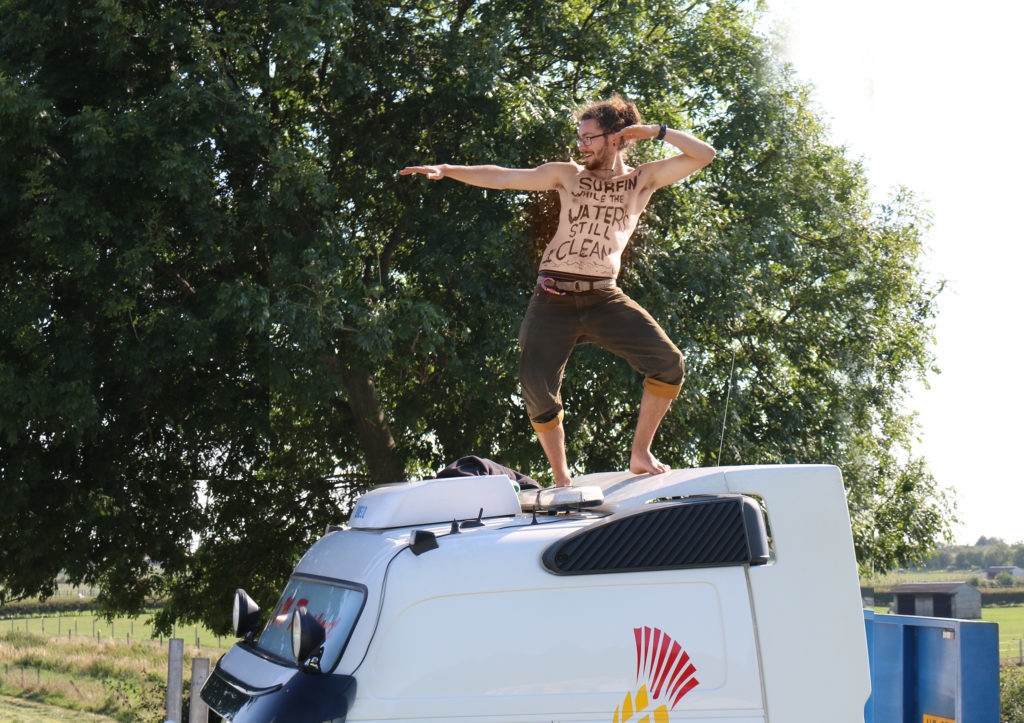