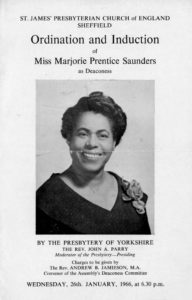 Marjorie Prentice ‘Madge’ Saunders lived in Burngreave from 1967 to 1975, during which time she was deaconess at St James’ Church on Scott Road which was then a Presbyterian Church. It is now a United Reformed Church and some of the congregation have memories of Madge whom several have described as being “a strong woman”. As a black woman, Madge’s life was a series of ‘firsts’, breaking through prejudice and discrimination in her fight for social justice. Her religion was a key inspiration in her life.

Madge was born in 1913 in Galina, St Mary Parish, Jamaica. She was the first first year student to become head girl at the Bethlehem Moravian Teachers’ College in St Elizabeth and after leaving she was to make some changes to basic education in Jamaica.

She studied at St Colm’s College in Edinburgh in 1948.

She became the first and only black woman to be ordained as a deaconness in the Presbyterian Church.

She was the first black woman to come from Jamaica to Britain as a missionary. Madge told of how Rev RC Gillespie, the minister at St James’, had originally asked the church “for a man from Jamaica to come from the church to work with the immigrants.” On coming to Sheffield, she personally experienced problems in finding accommodation and suffered racist abuse. She helped set up advice sessions for new arrivals and said later:

“I tried to bring about understanding and respect for the immigrants as people who need no special treatment, only wanting to be treated as human beings.”

Madge became a member of the Race Relations Committee, regularly spoke on Radio Sheffield and wrote a book called ‘Living in Britain’ which was later translated into Urdu and Gujerati.

“We tackle the evils of racism, injustice and the moral and spiritual breakdown of our time.”

Unusually for a woman in those days, she became the leader of the congregation at St James’. On returning to Jamaica in 1975, she became the first ordained woman minister in the United Church of Jamaica and the Cayman Islands.

Madge continued her educational, religious and social work and often spoke on Radio Jamaica. An International Conference and Retreat Centre was named after her. She was even nominated for the Nobel Peace Prize.

In 2002 a group of twenty people from St James’ took ‘a journey for justice’ and went to see Madge in Jamaica. Their visit included meeting the Governor General of Jamaica who was alleged to have been in awe of Madge!

Madge died in 2009. She still had the scissors which the mayor of Sheffield had presented to her