Story and photos by James Woollen

On the 26th November, St Catherine’s held their Christmas fair attended by family members of the residents. Glasses of sherry and mince pies were handed out and there were some very nice festive stalls selling chocolates, sweets and festive crafts such as scarfs and decorated baubles . Entertainer Paul Barrie was booked for the event and he performed some old time classic songs that were well received by the residents, staff and visitors. He also had people singing and dancing and interacted very well with the residents.

After the singing and dancing there was a raffle with some very nice festive prizes such as hampers and gift boxes. 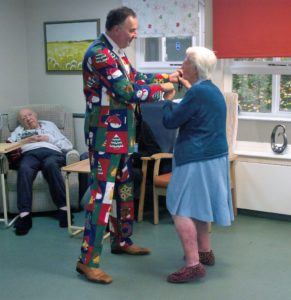