The centre was established in 1996 and for over twenty years, it has cared for and educated pre-school children of parents and carers from Burngreave and surrounding areas. As an Ofsted outstanding provision Local families were invited to come along and enjoy the day at the centre, which was previously the Ellesmere School, to celebrate the completion of three major refurbishments. The upper floor of the Centre has been completely renovated and a new roof has been put on the building so it can be used for workshops and activities by local groups, artists and practitioners.

Sharon was extremely busy with other visitors, who shared their surprise at the extent of the renovation. I decided to take myself around the site to have a closer look at this extraordinary setting! On the first floor there is a state of the art facility used as a fabulous kitchen area where people were making an array of very tasty food from a range of cultural backgrounds; these dishes were beautifully displayed and on sale. Outside, there is a play area where parents had the first opportunity to see the brilliant new equipment, which will be used by children attending the centre. There is a lovely Yoga, Meditation Room too, which can be hired.

A new transcultural play and emotional therapy centre named Emosi has been created in the former school caretaker’s house. This provides an oasis for children with a quiet, tranquil and calming garden space where young children with emotional and behavioural challenges can be assessed, supported and cared for.

Speaking at an Open Day for professionals and practitioners in Early Years Development at Emosi in Burngreave, local MP Gill Furniss praised the team behind the new centre and pledged her on-going support for the new service:

“Emosi looks just fantastic. I just can’t believe the transformation that has turned the old school building into a new therapy and assessment centre that is simply first class. The services that are planned to be provided at Emosi are badly needed in the area and right across Sheffield, I will be giving the centre my full support and I urge others in Sheffield to do the same and make full use of this amazing new facility in our city.”

The team at Ellesmere are very excited about their new services. To view the new facilities, call Dr. Curtis on 0114 281 2143. 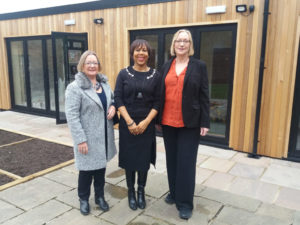