New age travellers living near to the former Sheffield ski village have been told they have 28 days to leave the site after losing their legal battle.

The group, living on land off Pickering Road, had challenged an eviction notice issued by Sheffield City Council. Travellers arguing against eviction said they had lived on the site for more than a decade and as a result had an “implied licence to occupy the site”.

“No developer would be prepared to undertake the task of developing a site such as this without being guaranteed vacant possession of all of it.”

Mr Robinson also refused the group a right to appeal, although they will be appealing against that decision. He refused the council demand that the defendants pay the council’s costs.

“It’s a shame that they’re not going to give us extra time to tidy the site up, that’s going to be an extra cost to the tax payers, which we didn’t want. If they’d told us in 2015 that they wanted the land back for 2017 then we would have moved peacefully and quietly, had time to fix up vehicles and clean up after ourselves”

“We need to enact the decision that’s been given today but I think that we will do that in a human and common sense way. I would hope that people move on as quickly as possible, but not in undue haste.”

Sheffield Ski Village opened in the 1990s but has been derelict since fires in 2012. The land the travellers live on has been vacant since the 1970s. 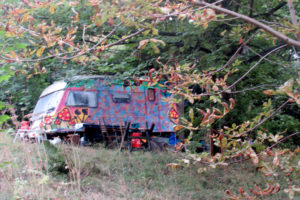