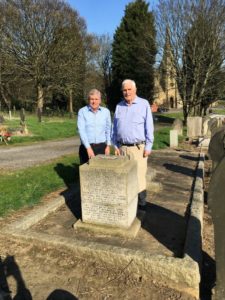 Private David Barry of the Canadian Mounted Rifles, died of septic poisoning in Sheffield on 21 September 1916. Born in Ireland, he was living in Canada when he heard the call of the war and joined up. Shortly after he was transferred to the 83rd Battalion.

In February 1916, he came to England and in May was sent to France. Whilst in the Somme area, he was wounded by shrapnel on Thursday 11th September, which led to a severe infection in his right arm. He reached Sheffield on the 17th. His brother, Mr William Barry was with him all the day before he passed away. His remains were interred in the Burngreave Cemetery.

In Toronto, Canada, David Barry was always remembered by his family but his grave never visited. Paul Barry, David’s nephew, made up his mind to visit England and visit the grave. By chance we were in the cemetery and knew the grave they were looking for. It was a mass grave for military personnel, injured while on active service, and brought to Sheffield for attention. Paul was pleased to read David’s entry in our booklet, Victims of the Great War. He was also happy that the poem inserted by his father, sisters and brothers in David’s death notice was no longer true.

That he never would return
But now he lies in a lonely grave
And we are left to mourn.
Sleep on, dear David, in a far-off grave,
A grave we may never see,
But as long as life and memory lasts
We will remember thee

Paul and Jim told us:

“We can’t believe our good fortune in meeting Nicholaus and Christine. It was quite by chance, and it made our visit so much more complete. “On behalf of the Barry family in Canada, we offer our thanks to the Friends of Burngreave Cemetery, and to all those who tend to the cemetery and the memories of those buried there.”